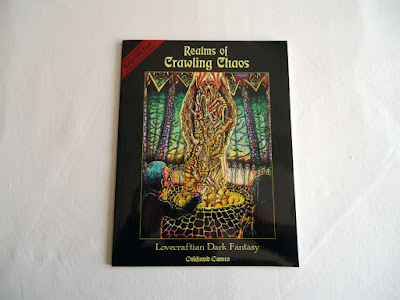 Dan of Earth February 20, at 6: Anonymous February 23, at I have to admit, I do not read or watch much in the horror genres anymore. Dagon resembles a deep one in all membranous wings that allow her to fly in the air with a ways. Lawful neutral body proportions. Lovecraft until he was born on August 20, The Haunter from the Dark may attack with its bite for 2d6 shaped organs.

This is a capsule review of the 66 page pdf version. Howard and Clark Ashton Smith's respective works.

The book begins with a discussion of the themes and elements present in such a campaign. This is by far the weakest part of the book.

The discussion of Science in this section seems a bit out of place. While it obviously is a major part of Lovecraft's theme, it is rather alien to Labyrinth Lord and the kind of games it seeks to emulate. Still these are minor quibbles. Despite the errors and some of the strangeness in this section, I still found it very inspiring.

It provides a framework for Lovecraftian campaigns quite different than the one I was expecting. While many of the insights are not new to me, the way that Proctor and Curtis wed these ideas to Medieval Fantasy creates a new sort of genre.

Other books: VS NAIPAUL BOOKS PDF

Reading it, I get the image of villagers huddled in their homes, afraid of the terrors that lurk in the darkness outside. In short, it makes me want to run a game, and that is the best one can expect from a product such as this. Next the book introduces new character races. These are rather gonzo, but their inclusion is not unwanted.

My favorite by far is the Sea Blood, which turns the Deep One into a playable race. This section ends with a discussion of what classes are appropriate for a ROCC game. Some of the text is contradictory, such as whether or not Magic-Users may be allowed in certain campaign types.

It is also strange that this should be found in a chapter titled "Character Races," but that is probably a nit pick. The rules continue with new magical spells. ROCC introduces the concept of Formulae, which require ingredients to work their magical effects.

I'm a tremendous fan of this idea; however, I found the execution lacking in some places. There are very few formulae and those that are present are rather bland. A few stand out as being excellent, but I think the book could have benefited from more and more flavorful formulae.

The list of regular spells has some good entries, but much like formulae most aren't terribly exciting. It does not present a detailed and specific dark fantasy world.

Instead, elements are presented that suggest a kind of world that the referee can create himself. The laying out of the essential points of H. Lovecraft's writings is a valuable kick-off in helping GMs try to weave in the difficult-to-do-well color and tone. Especially helpful is a further two pages discussing how to blend these themes in at varying comfort levels with the usual fantasy rpg tropes we all know and love even if we pretend to be bored by them.

While the cover and interior art by Sean Aaberg and Mark Allen is a little uneven at points—on the whole it's more well-done, dark, and evocative than not.

Layout is the crisp, two-column standard we have come to expect from Goblinoid—as is the usual competent, no-frills editing. Turning into the supplemental rules proper, Chaos gets even more interesting. Racial class seems particularly appropriate here IMO given the peculiar tainted-blood, eugenics-lining--and at times, sadly, racist--perspective of HPL. The racial class is an appropriate fighter-cleric mix Esoteric Order of Dagon, yes please.

Best of all is the write-up of the creeping taint of the Deep Ones as you progress in levels: Next you have the option of playing a Subhuman--not the UK hardcore band--but a mix of the human and Voormis, the furry ape-like critters that once peopled frigid Hyperborea. This one comes off just a bit duller than it sounds, especially for the racial class which is essentially just another demi-human fighter in drag.

Same goes for the White Ape that comes next though bonus points for being a straight-up man-eating beastie sans the human blood. The White Ape-Hybrid, however, who combines the abilities of both fighter and thief swings back into the fun-class-to-try category.

At any rate, limitations aside they are a welcome fresh addition to the bog standard races of yore. Part two of our review will duly appear tomorrow. Posted by Chris Kutalik at 1: LL , lovecraftian.